Home » Aging and inequality based on age » Trends in Aging

Over the past 25 years. the U.S. population has been aging. The median age (the age at which half the people are younger and half  re older) has increased by slightly more than 6 years-from se in 1980 t? 36.4 in 2006 (U.S. Census Bureau, 2009)is change  as  partly a  result of the Baby Boomers (people born between 1946 and 1964) moving into middle age and partly a result of more  people living longer. As shown in  figure 12.1a. the number of older persons-age 65 and above-increased Significantly Significantly Significantly between   980 and 2000. The population over .lge 85 has been growing especially fast. When new ce,IS data for the 2010 census are  available.

we will no doubt learn of additional changes in the age composition of the U.S. population. An increase in the number of older  people living in the United States and other high-income nations resulted from an increase in life expectancy (greater  longevity)  combined with a stabilizing of birth rates (Atchley and Barusch, 2004). Life expectancy is the average number of years ,!Jhat a  group of people born  in the same year could expect to live. Based on the death rates- in the year of birth, life expectancy shows the average length of life of a cohort=« group of people  born within a specified period of time. Cohorts may be established  n the basis of onc-, five-, or ten year intervals; they may also be defined by events taking place at the time of their birth, such as   expressions babies or Baby Boomers (Moody. 2002). 1’01’ the cohort born in 2004, as an example. life expectancy at  birth was  7.9 years for the overall u.s. population- 75.2 for males and 80.4 for females. However. as Figure J 2. J b shows. there arc   significant racial-ethnic and sex differences in life expectancy. Although the life expectancy of people of color has improved over  he past 50 year§,. higher rates of illness and disability-attributed to poverty, inadequate health care, and greater exposure  to  environmental risk factors-still persist. Today, a much larger percentage of the u.s. population  is over age 65 than in the past. One  f the fastest-growing segments of the population is made “1′-  of people age 85 and above. 111is cool is expect-i to almost  double  n size between 2000 and 2025 (loS.  Census Bureau. 2009); by the year 2050. the Census Bureau predicts that the number of  1I1 age 85 and

over will have increased to about 20 million (almost 5 percent of the population). Even more astonishing is the fact that the  umber of centenarians (persons 100  years of age and above) in this country will increase more than 12 times. from 66.000  n,,1999 to ‘about 834,000 in 2050 (L. Ramirez, 1999). TIle current distribution of the u.s. population is  depicted in the “age  pyramid” in Figure 12.1d.lf, every year, the same number of people are born as in the previous year and a certain number die in   each age group, the rendering of the population distribution should be pyramid shaped. As you will note, however, Figure  12.1 d is  not a perfect pyramid, but instead reflects declining birth rates among post-Baby Boomers.

aging the physical, psychological, and social processes associated with growing older. chronological age a person’s age based on  ate of birth.  .functional age a term used to describe observable individual attributes such as physical appearance. mobility,  trength, coordination, and mental capacity that are used to assign people to age  categories. life expectancy an estirn=e of the  verage lifetime  of people born in a specific year. cohort a group of people born within a specifi ed period in time. 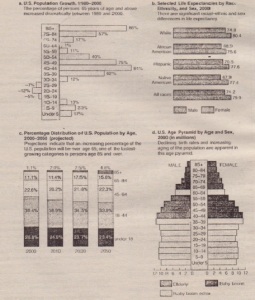 As a result of changing population trends, research on aging has grown dramatically in the past 60 years. Gerontology is the study  f aging and older people. A subfield of gerontology, social gerontology, is the study of the social (nonphysical) aspects of aging,   including such topics as the societal consequences of an aging population and the personal experience of aging (Atchley and   lusch, 2004). According to gerontologists, age is viewed differently from society to society, and its perception changes over lime.

Posted on September 5, 2014 in Aging and inequality based on age

More from:  Aging and inequality based on age