Home » ROLES AND STATUS » THE REVOLT AGAINST ASCRIPTION

THE REVOLT AGAINST ASCRIPTION Sociology Help

THE REVOLT AGAINST ASCRIPTION

All kinds of status ascription are under attack throughout much of the world. Tests claiming to measure intelligence or aptitudes are criticized and: efforts are made to limit their use.Racial discrimination" is another term for status ascription by race. Racial and ethnic groups are rebelling against subordinate status ascription. There is no universal serge toward racial equality. for in' some parts of the world, racial and ethnic persecutions have been rising .. But ii many areas, racial and , .ethnic minorities are militantly demanding an end to status ascription by race and are finding many supporters. among the general population Differences in class status are under sharp attack as undemocratic and op-' repressive. Ascription by age and sex is a topic of equally bitter debate. 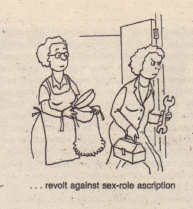 In conclusion, role-ascription offers a simple way of dividing the work of society, and it facilitates early and successful role preparation. But role ascription is successful only when most people wholeheartedly accept their ascribed roles. Vast numbers of people are today questioning or rejecting them. While it seems doubtful to sociologists that all status and role ascription will ease, changes in ascription will continue

Posted on September 2, 2014 in ROLES AND STATUS

RELIGION AND SOCIETY
Ascription BY MERIT

More from:  ROLES AND STATUS