It is never safe to predict social change by simply projecting recent trends into the future. As recently as 1970, most social scientists assumed that urban growth and rural depopulation would continue indefinitely. They were dead wrong,” A 1969 Harris Poll reported that two-thirds of large-city residents wished to live elsewhere within ten years [Harris, 1970]. Many. have fulfilled their wish. Rural areas and small towns are now the fastest foll0wing parts of the United States–up rent, or 8.4 million people, durirg the 1970s. Non metropolitan counties grew much faster  counties between 1970 and 1977 [Brown and Wardell, 1980], while the smallest metropolitan areas showed the largest growth, . as shown on Table 18-1. This is the first decade sirice 1790 when urban areas did not grow at the “expense” of rural areas. During the 1970s, the white population of central cities Jell by 6.1 million, while the black  copulation grew by 3.6 million and the Hispanic population by 2.5 million [Bureau of the Census, 1982c, p. 23]. The developing pattern for most metropolitan areas is a minority dominated central city surrounded by a white fringe. Interstate migration is heavily to the “sunbelt” states of the south and southwest [Brown and Wardell, 1980, pp. 10-11]. During the 1970s, there was a net migration of 5.2 million persons from the northeast and north central states to the south and southwestern states [Bureau of the Census, 1981a, p.T]. Ironically, this scattering of our population is increasing our dependence upon automobile transportation, though the long-term outlook for gasoline supplies is uncertain. ” Three reasons are given by Brown and . Wardwell [1980, p. 14] for this .population turnaround: (1) economic decentralization, with non farm employment in metropolitan. 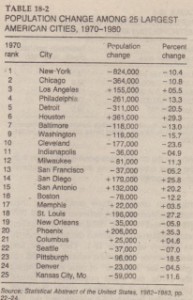 What patterns emerge from this table? What is common to most of the cities showing large losses? What is common to most of the cities showing large
gains tan counties growing by 22 percent between 1970 and 1977; (2) preference for country and small-town living, as revealed by national opinion polls [Harris, 1970; Fuguitt and Zuiches, 1975;.Zuiches and Carpenter, 1978]; and (3) modernization of rural life. This turnaround
is definitely not a retur n to the relaxed,bucolic rural life which we imagine our ancestorsto have led. Most of these rural migrants locate within commuting distance of metropolitan areas [Luloff, 1980). They demand all
the urban conveniences and soon become as involved in the organizational life of their .new communities as are the old residents [Rank and Voss, 1982). This migration is one of the reasons for the “fading rural-urban distinction,” as discussed later in this chapter. CHANGING RACIAL STRUCTURE. Since 1940, the black population of our central cities has been growing rapidly while the white population has been fleeing to the suburbs. Between 1950 and 1980, blacks increased from 12.2 to 22.5 percent of the population of the central cities, while declining from 6.6 to 6.1 percent of the population of the suburbs. The number of black suburbanites increased, but their percentage of the total suburban population declined slightly because white suburbanites increased even faster. Most of the black suburbanites are prosperous and ambitious middle-class blacks who are leaving the inner city to the welfare poor, the unemployed. and ill-employed, the broken families and the derelicts. Most black suburbanites
move into the older suburbs, where they remain as segregated as they were before moving [Farley, 1970; Clark, 1’979]. The growth of the black population of the central cities is slowing down, partly because the rural pool of possible black urban migrants is running low. For the nation as a whole, racial segregation has been declining. But most of this decline is in the smaller metropolitan areas and in areas of relatively low
, black population. In heavily black areas, residential
segregation has been increasing [Van
Valey et aI., 1977J. Over four-fifths of American
blacks are now urban, making them the
most highly urbanized major segment of our
population. Four central cities had black majorities
in 1970-Atlanta, Gary, Newark, and
Washington, D.C.-and the 1980 census added
Baltimore, Birmingham, Detroit, New Orleans,
and Richmond to the major cities with
black majorities ..