Home » Social and Institutions » THE DEVELOPMENT OF INSTITUTIONS

THE DEVELOPMENT OF INSTITUTIONS Sociology Help

THE DEVELOPMENT OF INSTITUTIONS
The Process of Institutionalization Institutions emerge as the largely unplanned products of social living. People grope for
practical ways of meeting their needs; they find some' workable patterns which harden  through repetition into standardized customs. As time passes, these patterns acquire a body of supporting folklore which justifies and sanctions them. The, custom of "dating" developed as a means of mate selection. Banks gradually developed as the need for storing, transferring, borrowing, and lending money gave rise to a series of standardized ways of doing these things. From time to People might gather to codify and give legal endorsement to these practices as they continued to develop and change. In such manner, institutions arise. institutionalization consists of the establishment of definite norms which assign status positions and role functions for behavior. A norm is a group expectation of behavior. Institutionalization involves replacement of spontaneous or experimental behavior with behavior which is expected, patterned, regular, and-predictable. A tavern brawl is institutionalized behavior a professional boxing match is institutionalized. A set of social relationships has become institutionalized when (1) a regular, system of statuses and roles has been developed, and (2) the system of status and role expectations has been generally accepted in the society. Dating in American society meets both these qualifications. A rather clearly defined set of courtship roles emerged, in 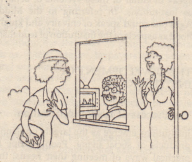 which the duties and privileges of each party are defined (he asks, she accepts, he pays, etc.) and safeguarded with some limitations or restraints intended to prevent complications thus dating became part of our marriage and family institutions. In recent years formal dating has declined in favor of less formal boy-girl companionship; this simply shows that institutions change.
When we the laying be are institutionalized, we mean that it was gene ally accepted in the society as a necessary part of growing up and finding marriage partners. Many societies have also institutionalized premarital sexual intercourse, making it a normal , and expected part of the activities leading to marriage. Although premarital intercourse is common in American society, it has not been ( institutionalized. Present trends, which include providing contraceptives a h.' abortions to the unmarried and allowing on marital cohabitation in dormitories may be leading to the institutionalization of premarital intercourse. Today, many parents accept. somewhat unhappily, the fact that their unmarried children have live-in boyfriends or girlfriends, but non marital cohabitation will not be institutionalized unless (or until) Mother sends her daughter off to college with. the fond hope that she will find a nice boy to sleep with. . ' This has been a functionalist analysis, cf institutionalization. We have said that people grope for ways of meeting their needs and that ways which seem to work out well are repeated, standardized, and eventually institutionalized. Conflict theorists doubt that the institutionalization process is this directed and automatic, They claim that the prosperous and powerful are able to guide the institution  Ionization process along lines beneficial to themselves. Thus the corporation became an economic institution more rapidly than labor unions did because corporations were beneficial to investors. The extent to which the institutionalization process is UN directed or consciously con trolled is one of  the continuing unsettled  sociology.

Posted on September 3, 2014 in Social and Institutions

More from:  Social and Institutions