Each person holds several different statuses at the same time, and these statuses may not carry the same rank. The deposed prince who runs a restaurant, the new college graduate ‘who works as a waitress, and the world famous statesman’s son who is successful at nothing are examples. The term status inconsistency is used when one of a person’s statuses is incompatible with his or her other statuses (the terms status discrepancy and stat is incongruity are also sometimes used). Status inconsistency means that one’s several statuses do not go together in the expected manner. Age, sex, and class are three kinds of statuses which may be inconsistently combined. The young ‘Soldier may be old enough to drive a tank but not old enough to buy a ” peer. Old men who pursue young women are disapproved; old women who seek young lovers .are ridiculed; old men who announce the birth of a child are met with a ribald ‘. cynicism Status inconsistency is also present when one is not generally recognized to hold a status which one feels to be deserved, such as the new-rich who are scorned by the blue  bloods, other immigrant physician who must work as a hospital orderly until gaining certification. 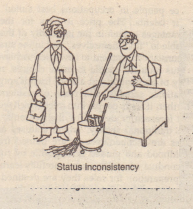 Status inconsistency produces confusion. Should one talk baseball or baby-sitting with the berated male who keeps house while his wife runs a bulldozer? When a woman executive’s male secretary answers the phone, callers may assume they have, the wrong
number. Persons suffering status inconsistency may respond by identifying with the higher-ranked status and by seeking to avoid or deny the lower-ranked status, as with the new-rich who cultivate upper-class manners or immigrant who “Americanize” their names. Or they  identify, with the lower of their statuses, as in the case of the successful and prosperous black who, instead of seeking acceptance among rich whites, becomes a militant leader of poor black people. Awareness of status inconsistency generally produces a behavior response of some kind [Lenski, 1954; Mitchell, 1964; Treiman, 1966; Broom and Jones, 1970; House and Harkins, 1975; Hornung, 1977; Wilson and Cooper, 1979].

Posted on September 2, 2014 in ROLES AND STATUS

More from:  ROLES AND STATUS