Aside from its general attitude toward change, each society has many specific attitudes and and values which cling to its objects and activities. When government agents introduced hybrid com to the Spanish-American farmers of the Rio Grande Valley some years ago, the farmers readily adopted it because of its superior yield, but within three years, they had all returned to the old corn, They did not like the hybrid com because it did not make good
tortillas [Apodaca, 1952]. People's established likes and dislikes are important factors in social change. If an object has a purely utilitarian value 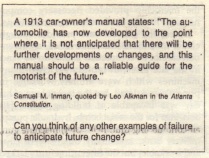 that is, if it is valued because of what it will do change may be accepted quite readily. If some feature of the traditional culture ,S valued-intrinsically-valued for itself, aside from what it will do-change is less readily readily accepted To the American farmer, cattle are   source of income, to be bred, culled, and butchered whenever most profitable. But to many of the Nilotic peoples of Africa, cattle represent intrinsic values, The owner recognizes and loves each cow. To slaughter 'one would be like killing one of the family. A Packet with a hundred cattle is rich and respected; one with only a dozen is poor; one with no cattle is ignored as though dead. Efforts of Western officials to get such peoples to manage their herds "rationally"-to cull their herds, breed only the best, and stop overgrazing their lands-have generally faiLed. The average American, who usually takes a coldly rational, relatively unsentimental view of economic activities, finds it hard to appreciate the sentiments and values of non-Western peoples. He or she is irritated by the Biaga of Central India, who refused to give up their primitive digging sticks for the far superior moldboard plow. Why? The Biaga loved the earth as a kindly and generous mother; they would gently help her with the digging stick' to bring forth her yield but could not bring themselves to cut her "with knives" [Elwin, 1939, .pp. 106-107]. The American is annoyed by the Etowah Indians' unwilling.

sens to adopt green manuring (plowing under under a of green Sanhedrin fertilizer). But to this Bind's, "green manuring involves a very cruel cit of plowing under the Sanhedrin leaf and stalk before they are ripe. This act involves violence" [Mayer, 1958, p. 209]. Yet is there any basic difference between these illustrations and American refusal to eat horse meat because it conflicts with our values? How about those America n groups won condemn homosexuality, sexual permissiveness,. abortion, divorce, alcoholic beverages, or the eating of meat because these conflict with their values? To each of us, it seems right to reject any innovation that conflicts with our  mores or values; when others do likewise, their refusal often impresses us as ignorant superstition or stubbornness. Such is ethnocentrism!