Social Status and the Birthrate

The folk proverb that the “rich get richer and the poor get babies” describes the relationship between social status and the birthrate. In general. urbanized, well-educated, and high income groups have lower birthrates, while rural, poorly educated, and low-income groups have higher birthrates (see Figure THE PLANNING ATTITUDE AND FAMILY SIZE. In the discussion of the deferred-gratification pattern in the chapter on social mobility, we found that planning was not a typical lower class pattern. Instead of trying to control their environment, lower-class people more often see themselves as creatures of fate, subject to forces beyond their control. Most of them do . not desire larger families than middle-class people, but they get larger families because they have neither strong motivation to limit family size nor easy access to birth control and abortion services. Yet research shows that many lower-class people prefer smaller families and will use contraceptive techniques when made easily available by Planned Parenthood or other agencies [jaffee, 1974).   The total black and Hispanic birthrate is higher than the white, but it shows the same relationship to social status, Among the college educated, the black birthrate is actually .lower than the white. Women in the labor force have smaller’ families than those not employed. This supports a current theory
that women’s liberation is a vital aspect of population control. In the United States and in many other countries as well, the birthrate differential between social categories has narrowed. Rural and urban birthrates are nearly the same. ‘Married white women, 35 to 44 years of age
with one to three years of high school, had a birthrate 141 percent of college-graduated women’s birthrates in 1975, but had dropped to 128 percent in 1980 [U.S. Bureau of the Census, 1976, p. 36; 1982 d, p. 60). The Asian and the white birthrates were nearly identical in 1980 [Davis,’ 1982, p. 8). Black birthrates dropped from 18.4 in 1970 to 15.9 in 1979 [Statistical Abstract, 1981, p. 59). Birthrates of  Hispanic women between 35 and 44 years of age dropped 19 percent in the same period U.S. Bureau of the Census, 1976, p. 34; 1982d, p. 53]. This would seem to show that easier access to family planning clinics in recent  years has lowered the birthrate of the more highly fertile groups. If this trend continues, we may see racial, regional, and economic birthrate differences disappear. This will not happen immediately. For some years we can expect a higher fertility among lower-income groups and large ethnic minorities. Current estimates anticipate a population growth of 23 percent in the United States between 1980 and the year 2000. The black population is expected to increase 36 percent as against 10 percent for the white population. Hispanic whites, aided by immigration, are expected to increase 62 percent [calculations
based on data in Davis, 1982, p. 9). The results are indicated in Table 17-1. –
There are many countries with ethnic birthrate differentials. The dominant ethnic group is usually more prosperous and has a lower birthrate than the subordinate ethnic groups. 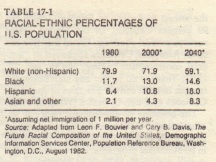 This means that subordinate ethnic groups may eventually become the majority and check greater political power. In the Soviet Union, the Russian mothers average 1.9 births, as compared with 5.8 births for mothers in the four non-Russian Republics in central Asia. In 1970, the armed forces of the Soviet Union were 56 percent Russian, but they will be only 44 percent Russian by the year 2000 Feshbach, 1982]. The civil war in Lebanon began in part because the  Mosley were out breeding the Christians and demanding  greater political.power. Thus ethnic birthrate differentials ‘may create political instability, and even civil warfare.