How does a group or society cause its members to behave in the expected manner? Social Control Through Socialization Fromm [1944] has remarked that if a society is to function efficiently, “its members must acquire the kind of character which makes them want to act in the way they rave to act as members of society They have to desire to do what objectively is necessary for them to do.” People are controlled mainly by being socialized so that they fill their roles in the expected manner through habit and preference. We suspect that very few people actually enjoy paying taxes, washing dishes, or getting up for a midnight baby-feeding, yet most people do those things’when expected. As we stated in an earlier chapter.. the crucial part of one’s role preparation is the learning of attitudes and wishes-which make the role attractive. Most role failures come not because  one is unable.to.perform the role’s tasks but because one is trapped in a role one does not really want or enjoy Socialization shapes our customs, I ‘our wishes, and our habits. Habit and custom arc great time-savers. They relieve us of the need for countless decisions. If we had to decide whether and how to perform each act-when to arise, whether and how to wash, shave, dress, and so UN-few students would get to class at all! The members of a society are schooled in the same customs and tend to develop much the same set of habits. Thus habit and custom are great standardizes of behavior within a group. If all members of a society ,share similar socialization experiences, they will voluntarily and unthinkingly act in very much the same ways. They will conform to social expectations without any conscious awareness that they are “conforming,” or any serious thought of doing otherwise. The desire of two people to get married arises from motives less academic than a wish  to conform to the nuclear monogamous family pattern,” yet such conformity is the result. 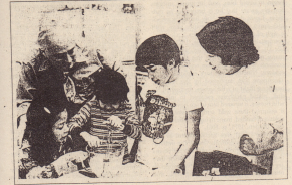 Through socialization, one internalizes the norms, values, and taboos of one’s society. We repeat that to internalize them means to make them part of one’s automatic, unthinking responses. People who fully internalize the mores will obey them even when nobody is looking, because the idea of violating them is unlikely to occur to people who have fully internalized them. If seriously tempted, conscience may arise to prevent a violation. This is what happens, most of the time, in a society with a stable, integrated culture and a consensus upon values. As we shall See, few if any modern societies fit this model at all perfectly.

Posted on September 2, 2014 in SOCIAL ORDER AND SOCIAL CONTROL