Biological Factors The recent growth of a discipline known as sociology has drawn renewed attention to biological factors in human behavior. Sociology is defined by its most prominent advocate [E. Wilson, 1975, po: 4] as "the systematic study of the biological basis of human behavior." We shall look at some ways in which the interaction of biology and culture influence human behavior, starting with the development of human society. Cultural accumulation 'at first was very slow. People lived in the open or in caves they used simple stone tools to skin animals and cut 'off chunks of meat: for digging edible roots, they probably used pointed sticks. There is some evidence that fire was used, but it is not known whether humans could make fire themselves or simply preserved fires started by lightning. During this period humans became skilled hunters, but there is 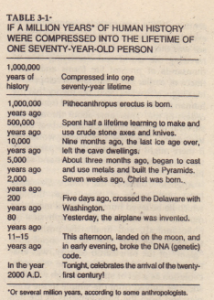 considerable argument as to whether these early hominids were humans at all. Their cranial capacity was in the range of 425 to 725 cubic centimeters, which would give them a skull measurement similar to that of the .ape and far below the 1,000 to 2,000 cubic centimeters range of today An acceleration in cultural development did not take place until the appearance of Neanderthal man about 150,000 years ago, with a cranial capacity similar to that of modern 'man-averaging about 1,500 cubic centimeters. Humans now had enough brains to build a culture, but basic inventions such as the wheel the plow writing and many others were needed before a complex culture was possible.