Scientific observation is IUXUrate. The scientific observer tries to make sure things are exactly . as described and avoids jumping to conclusions. Novelists may fantasize and politicians may exaggerate, but the scientist must try to be accurate. Scientific observation is precise. While accuracy refers to the truth or correctness 0"a statement, precision refers to degree or measurement. No respectable social scientist would say "I interviewed a lot of people, and most of them feel that things are terrible," and claim this was a scientific investigation. '(How many people? What measuring instruments? How "terrible"?) Since scientific writing is precise, scientists avoid colorful literary extravagances.

Tennyson's lines, "Every moment dies a man; every moment one is born," is literature not science. If written with scientific precision it might read, "Every 0.5% seconds, on the average in 1980, died a persevere 0.2448 seconds an infant was born." Literary writing may be intentionally vague, stimulating the reader to wonder what is meant (e.g., was Hamlet insane?), but the dramatic sweep of the novelist and the provocative imagery of the poet have no place in scientific writing. How much precision is needed? A billionth of an inch is too large an error for a nuclear physicist; for a social scientist studying crowded housing, a measure to the nearest square foot is satisfactory. Scientists seek as much precision as the situation requires. If conditions of observation do not permit such precision, the scientist must qualify judgment until more precise observations can be collected, Scientific observational is systematic. Conclusions based on casual recollections are unreliable. Judgments which begin with, "I've talked to a lot of people and should be classed as conversation not as research. Unless observations have been collected in an organized, systematic program they are likely to-be spotty and incomplete.

Objectivity's the ability to see and accept acts as they are, not as one might wish them to be.

Scientific observation is recorded. Human memory is notoriously fallible. Suppose a professor says, "Women usually don't do as well in this course as men." Unless this professor has computed average scores for men and women students, he is saying, "I have recalled the grades of hundreds of students, mentally computed averages, and found the male average score be higher The utter absurdity of such a statement shows how untrustworthy are all conclusions based upon recalling unrecorded data. Scientific observation is objective. This means that, insofar as is humanly possible, observation is unaffected by the observer's own belief, preferences, wishes, or values. In other words, objectivity means the ability to see and accept facts as they are, not as one might wish them to be. It is semiyearly to be objective when observing something about which" we" have no preferences or values. It is fairly easy to study objectively the mating practices of the fruit fly, but less easy to view the mating  practices of the human being with objective detachment. On any matter where our emotions, beliefs, habits, and values are involved, we are likely to see whatever agrees with our emotional needs and values. To be objective is perhaps the most taxing 'of all scientific obligations. It is not enough to be willing to see facts as they are.

We must know what our biases are if we are to guard against them. A bias is simply a tendency, usually unconscious, to see facts in a certain way because pf one's habits, wishes, interests. and values. Thus, a "peace demonstration" is seen by some as a courageous effort to save the world from collective suicide, while others see it as a misguided effort to replace hardheaded realism with idealistic mush. Seldom are "the facts" so undebatable that bias does not distort them. Selective perception s a tendency to see or hear only those facts which  support our beliefs and overlook others. Many experiments have shown that most people in a social situation Wii see and hear only what they expect to see and hear. If what we expect to see isn't there, we see it anyway! This is dramatically shown in a famous experiment' [Allport and Postman, 1947] in which observers were shown a picture of a roughly dressed white man holding an open razor and arguing violently with a well-dressed black man who was shown in an apologetic, conciliatory posture then the observers were asked to describe the scene. Some of them "saw" the razor in the black man's hand, where they expected it to be.

Others perceived it correctly,but in passing on a description of the scene (A described it to B, who described it to C, and so on), they soon had the razor in the black man's hand, where it "belonged." Even though they were not emotionally involved in the situation, had ample time to study it, and were making a conscious effort to be accurate in what they saw and reported or heard, the observers' unconscious biases still "led many of them to "see" or "hear" a fact that wasn't there,

Some common threats to objectivity, then, are vested interest, habit, and bias. Objectivity does not come easily to an observer, but' it can be learned. One can become more objective as one becomes aware of personal biases and makes allowance for them. Through rigorous training in scientific methodology, through studying many experiments and not ing many examples of objective and nonobjective uses of data, an observer may eventually develop some ability to cut through many layers of self-deception and to perceive facts with a greater degree of scientific objectivity.

The scientist also has another powerful ally-the criticism of colleagues. The scientist publishes research so that rt may be checked
by other scientists who may not share the same biases and who come to the problem with a different point of view. This process of publication and criticism means that shoddy work is soon exposed, and scientists who let bias dictate the uses of data are open to severe criticism Scientific observations are made by trained observers. A billion people watch the sun and moon sweep across the sky, but more sophisticated observers know that is not exactly what happens. Untrained observers do not know what to look for or how to interpret it.

They do not know the pitfalls which lead to inaccurate observation, nor are they fully aware of the tricks their own limitations and biases may play on them: Startling reports of  weird phenomena generally come from uneducated unsophisticated persons, and are discounted by the experts. When some remarkable observations are reported, the scientist  will want to know: (1) What is the observer's general level of education and sophistication? Is this person a member of a superstition-ridden folk group, or of a welkin formed and somewhat skeptical population? (2) What is his or her special knowledge or training in this particular field? Does this observer have the knowledge to tell whether this event has a perfectly natural explanation? Thus, the biologist among the ship's passengers is less likely to see a sea monster than are the members of the crew, and the meteorologist sees fewer UFOs than people with no special knowledge of atmospheric phenomena.

Many events happen without any scientific observer on the sidelines. If each sea monster  broke water before a wane of ichthyologists, and each revolution were staged before a team of visiting sociologists, our knowledge would be far more complete. But for many phenomena the only reports we have are the casual impressions of untrained observers who happened to be there; these reports may be interesting and possibly useful, but must be Interpreted most cautiously by scientists. Scientific observations are mode under controlled conditions. Laboratories are popular with scientists because they are handy places ,to control variables such as heat, light, air pressure, time intervals, or whatever is important. A variable is anything which varies from case to case. For example, people vary in height, weight, age, sex, race, religion, education, occupation, income, health, behavior characteristics and many other things

We have a scientific experiment when we control all important variables except one, then see what happens when that one is varied Unless all variables except one have been controlled, we·cannot be sure which variable has produced the results, If we wish to study say the effects of phosphates on plant growth, all other factors-seed soil water sunlight temperature humidity must be the same for all the sample plots then the varying amounts of phosphates on different test plots can be held responsible for different growth rates. This is the basic technique in all scientific experimentation allow one variable to vary while holding all other variables constant. There are complicated statistical procedures for multivariate analysis which enable the researcher to work with two or more variables at a time. But this is only a refinement of the basic procedure of holding all other variables constant in order to measure the impact of the one (or more) under study

Since laboratories are such convenient places to control the conditions of observation, scientists use them whenever possible. But much that is important cannot be dragged into a laboratory. Volcanoes and earthquakes can the courtship process very realistically by herding couples into a laboratory. Both physical and social scientists frequently must observe phenomena in their natural setting. Techniques may range from lowering a bathysphere to the ocean floor to. giving a questionnaire to a group of anny recruits. If we remember that the basic scientific procedure is the conducting of accurate observations, while laboratories, instruments, and computers are merely tools of observation, this difference in technique will not confuse us. 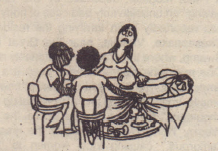 Spiritualists can conduct a very convincing seance In their own stage getting.

Is it not strange that most of those who claim to foresee the future are performing in shabby Carnivals and nightclubs instead  of raking in millions in Wall Street? Why has no professed mind reader ever won a world chess or bridge championship? Although the  are occasional newspaper reports of some psychic having "solved" a crime, is it not significant that police departments and intelligence agencies do not routinely employ psychic detectives? Although many exposes of the tricks of psychics, mentalists, fortune tellers, astrologers, and spiritualists have been published [Barber and Meeker, 1974; Abell and Singer, 198.11,their popular following today seems greater than at any time in recent history.In these several respects, then, scientific observation differs from looking at things. We spend our lives looking at things, and this activity brings us much information, many impressions, and numerous conclusions. But these conch ..;ions are clouded by accident of coincidence, by selective memory, and by personal bias. Therefore, before accepting any generalization as true, the critical observer wants to know what it is based upon. Is a . conclusion based upon a systematically collected body of scientific evidence, or is it an offhand reaction to haphazard observation?

SOCIAL SCIENCE AND COMMON SENSE
THE SCIENTIFIC METHOD OF INVESTIGATION