Religion and the Economy Sociology Help

Religion and the Economy
Does religion have any effect upon practical business matters? Business actions may sometimes appear to be entirely godless and amoral yet religion does have an effect upon the economy. Religious beliefs affect work habits,patterns of consumption, and the acceptance or rejection of new products and practices.
THE. PROTESTANTETHIC : One of the most influential theories about the iriterrelationship between religion and the economy is stated in Weber's The Protestant Ethic and the Spirit of Capitalism [1904]. W~ber noted that the Protestant leaders of the Reformation did not intend to erect the spiritual foundations for a capitalistic society. and often denounced capitalistic trends in their day. Yet the industrial revolution and the growth of large-scale business concerns was much more rapid in predominantly Protestant than in largely Catholic areas, and in mixed areas Protestants were muchand more active in business development. This circumstance helps explain the economicdepreasion in France which followed the expulsion of the Huguenots in the late seventeenth century. The phrase "as rich as a Huguenot" became a popular stereotype, anwhile 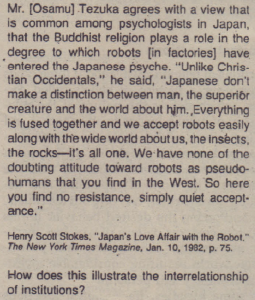 The Protestant ethic made religious virtues of individualism, frugal living, thrift, and the glorification of work-practices which obviously favored the accumulation of wealth. These practices are usually attributed to the Protestant emphasis on individual responsibility rather than churchly sacraments, to the interpretation of worldy success as a sign of godly favor, and to the reaction against the symbols of wealth, which had been accumulated by the traditional church. None of  these Protestant practices originated in a deliberate desire to encourage commerce, and perhaps for that reason their effect was all more potent. While most social scientists accept Weber's Protestant ethic theory as a plausible hypothesis, some disagree [Fanfani, 1955, and Samuelson, 1961].
Whatever may have been the case in earlier years, the Protestant ethic is no longer the monopoly of any religious group. Protestants have been influenced by a "consumer's ethic" emphasizing installment buying, leisure, recreation, and luxury consumption. Catholics and others have perhaps come closer to the Protestant ethic as they see that a disciplined life pays off in material rewards [Hunt and Hunt, 1975, p. 600]. Evidence suggests that no one religious group today can claim a clear edge' In .the possession of an ethical system which leads to economic success [Bouma, 1973]. A recent study of the effect of ethno-religious background- on the early career [Stryker, 1981] does fmd that both educational and career entry levels are influenced by religion ethnic background, although less than by social class ,factors. This influence, does not follow a strict Protestant Catholic split Jews rank higher than either. Apparently, even though,the earlier Catholic and Protestant attitudes have changed, the attitudes cultivated by religious groups may still have some effect on worldly achievement.

Posted on September 2, 2014 in Religious Institutions