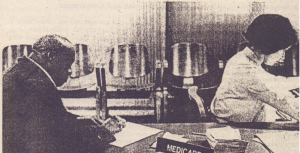 "' Institutional functions change. Government has assumed many services once performed by family or church. '(Hugh Rogers/Monkmeyer Press Photo Service) transfusions, or immunizations on which groups such as Jehovah's Witnesses or Christian Scientists may take issue with health 'authorities. Amish parents may object to. sending their children to high school, and sometimes a pacifist sect or pacifist members of denominations may come under state censure because of their opposition to. a military draft. At other times, there is a feeling that the state should intervene to protect members of a closely controlled cult harmful actions by cult leaders. These issues often arise but usually involve only small groups of' people Other' issues affecting more people involve the efforts of Roman Catholics and some other churches to, secure support for their schools Dr to block the state from sanctioning Dr providing abortions. Similarly, the mainline Protestant churches sometimes seek to.block legalization of gambing. Critics of this kind of church activity accuse churches of trying to. force minority moral values upon the majority. These critics say a church has every right to persuade its members to. follow its code of conduct but should not seek to. impose its standards on nonmembers. The church view is that such issues as state support of religious education Dr the, restriction of abortion are not views peculiar to. a few churches but standards of right which should apply to all. Views such as thete are, usually rejected by members of most other churches. Such efforts have some, power because' many holding these views are issue voters," while opponents are' generally concerned about a number of issues and will not support or oppose a candidate on the basis of only one issue. Since elections are often, decided by small margins, a few single-issue voters may have influence out of proportion to their number. However, repagaing