Occupational segregation contributes to a wage gap the disparity between women’s and men’s earnings. It is calculated by dividing  omen’s earnings by men’s to yield a percentage, also known as the earnings ratio (Reskin and Padavic, 2002). Overall, women  make approximately  80 cents for every dollar earned by men; however, this figure represents men and women who work a 35-hour-per- eek job, and it does not compare men and women who work the same job. As shown in. Figure 11.1, women at aLl levels of   educational attainment receive Jess pay than do men with the same levels of education.  Across different categories of  employment.   ata  continue to demonstrate this disparity, Moreover, the  wage gap is even greater for women of coLor. Although white women   n 2006 earned 80 percent as much as  while meJ 6868 percent and Latinas 58 percent   f   hat white male workers earned (U.S. Bureau of Labor Statistics, 2oo7a).   he gap increases as a person’s salary grows: Whereas 48  percent of people earning $20,000 to $25,000 per year

wage gap a term used to describe the disparity between women’s and men’s earnings. 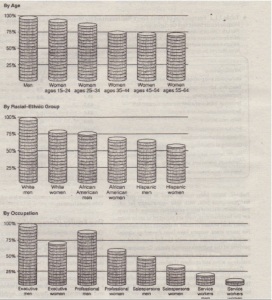 ~ Figure 11.1 The Wage Gap By Age: Although men’s average wages vary depending upon age, women’s average wages are always  lower than those of men in the same age group, and the older women’get, the greater the gap. Women ages 16-24 earn 93 cents for   every dollar earned by men the same age, but women ages 55-64 earn only 72 cents for every dollar earned by men ages 55-64. By racial-Ethnic Group: Across racial-ethnic groupings, men’s earnings remain higher than the earnings of women in the same   category. By Occupation: Regardless of occupation, women on average receive lower wages. Source: U.S. 8ur •• u of labor Statistics. 0070.

are women, women constitute less than 10 percent of people earning over $200,000 per year (Johnston, 2002). Likewise. among  older workers, the wage gnp between men and women is larger. Women’s earnings tend to rise

more slowly than men’s when they are younger and then drop off when women reach their late thirties and early forties, whet ens  he wages of men tend to increase as they age (Reskin and Padavic, 2002).

Pay equity or comparable worth is the belief that wages ought 10 reflect the worth of a job. not the gender or race of the worker.  ow can the comparable worth of different kinds of jobs be determined? One way is to compare the actual work of women’s and  ens  obs  and see if there is a disparity in the salaries paid for each. To do this, analysts break a job into components-such  as the   ducation. training, and skills required, the extent  of responsibility for others’ work. and the working conditions-and then allocate   points for each (Lorber,  2005). For pay equity to exist. men and women in occupations  that receive the same number of points   should  be paid the same. However. pay equity exists for very few jobs. and little change has occurred over the past  two decades in   any occupations. For example, for every dollar earned by men, women in the same occupation  earn 90 cents as office support  workers (secretaries,  clerks, etc.), 87 cents as restaurant servers, 70 cents as  lawyers, and 63 cents as financial managers (U.S.   bureau  of Labor Statistics. 2008).

More from:  Sex and Gender