Observational studies are like experiments in all respects except one: In an experiment the scientist arranges for something to happen in order to observe what follows, whereas in an observational study the scientist observes something which happens, or has already happened, by itself. Both rely upon systematic observation under controlled conditions in a search for verifiable sequences and relationships. Both are used in all the sciences, but the procedures for using them vary according to the material being studied. The types of studies which follow are not mutually exclusive, for a study may fit into more than one of these several categories

IMPRESSIONISTIC STUDIES. These are informal descriptive and analytic accounts based on observations which are less fully controlled than in more formal studies. They definitely are not a rambling series of anecdotes but are an organized 'presentation of purposeful observations. Suppose, for example, a sociologist with a special interest in the family visits Russia. To make an impressionistic study, this sociologist would outline in advance the kinds of information to be sought, the kinds of people to seek out and question, the places to visit, printed matter to collect, and other sources of possible information. Then, while traveling, the scholar would be alert Em: chances to ask questions about family life, visit "typical" families, scan papers and magazines and, collect any other information. The scholar returns home with some very definite impressions of Russian family life, but they are not based on a systematic, scientifically controlled investigation-on an orderly search of the published literature, on a scientifically constructed sample of informants, and so on by a drug, he traveled about the South, where everyone identified him as a black. Although °he was a native southerner, he found that the experience of being treated as a black brought many surprising revelations about black life in the United States at that time (Griffin, 1961). In another participial-observer study, Chockablock visited and lived in 120 rural communes over a ten-year period [Chockablock, 1980].

There are pitfalls in this technique. The participant observer may become so emotionally involved as to lose objectivity and become a dedicated partisan instead of a neutral· observer. Or the participant observer may overgeneralize that is, assume that what is found in the group studied is also true of all other groups. Since the data are largely impressionistic. conclusions are not easily verified. Yet the participant observer is not just "looking at things," but is applying a sophisticated scientific methodology (Bruyn, 1966; Friedrichs and Ludke, 1975] which has given us many insights and suggested many hypotheses for further study. Is it ethical to pretend to be a 10 al member of a group in order to attitude it? 15 such a deception justifiable? It is not easy to say when a deception ceases to be harmless. Perhaps the best answer is that a reputable scientist will be care~ not to injure the people being studied. The eyewitness account is.an amateur, small scale participant observer study. How do people act after a disputer, such as a tornado or an elision? What happen at a religious revival, a riot, a Pickering continuance? Rarely is there a visiting pencil in hand, ready to record the event. Social scientists often seek eyewitness accounts from persons who were there. A detailed eyewitness account, collected as soon as possible after the event, is a useful source of informational. Such accounts must be used with care, for the eyewitness is usually an untrained observer, who may not be reliable. Many studies live shown the dependability of eyewitness identification and how easily eyewitness reports can be "slanted" by the way the questions are put to the witness (Loftus, 1974, 1979; Buckhout, 1975]. Yet the eyewitness account· is priceless source of data for the social scientist. 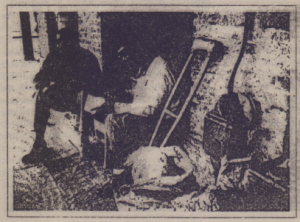 CASE STUDIES. The case study is a 'complete, detailed account of an event, situation, or development. It may be a life history of a person, a complete account of an event, or a detailed study of an organization. Erikson .(1976] made a study of the consequences of one disaster, the dam break and flash flood in 1972, in Buffalo Creek, West Virginia, interviewing survivors and reading all the recorded testimony available. The case history of a group-a family, a clique, a union, a religious movement-may suggest some insights into group behavior. An accurate, detailed account of a riot, a panic, an orgy, a disaster, or any social event may have scientific value. An unhappy family, a happy family, a community, an organization-almost any phenomenon can be studied by the case- study technique. Perhaps the greatest value of the case study is in the suggestion of hypotheses, which can then be tested by other methods. Much of our reliable knowledge about juvenile delinquency, for instance, has developed through the testing of hypotheses which were suggested by early case studies of delinquents (Thomas, 1923; Shaw, 1931). Much of our present knowledge of personality disorganization stems from hypotheses suggested by a classic collection of case studies in Thomas and Kisangani The Polish Peasant in Europe Americans (1923). These hypotheses are not often testid by the case-study method but by other methods

A generalization cannot be used upon a single case, for a case can be found to "prove almost anything. Generalizations must be based upon a large mass of carefully processed data, and the collection of a great many case studies is expensive. Also it is difficult to "add up" a number of case studies or compute averages or other statistical computations. Therefore we seldom use case studies when seeking to test a hypothesis. But after the hypothesis has been tested and we have arrived at some sound generalizations a good case study may give a beautiful illustration of these generalizations. For example, there is conclusive evidence that juvenile delin-quency is closely associated with unsatisfactory family life [Glueck and Glueck, 1959). A case study showing how unsatisfactory family life has apparently encouraged delinquency in a particular family makes a vivid illustration of this generalization. These several kinds of studies often overlap, and a study may fit into tore than one classification. For example, Roebuck and Fresh [1976] made a study of an after-hours nightclub (serving liquor after legal closing hours). They posed as ordinary patrons while listening and talking with the "night people." Theirs was a participant-observer study (they observed patrons while posing as patrons), an impressionistic study (they collected impressions, not sta~cs), and a case study (they studied one club).

The Chockablock study of communes mentioned earlier was a participant- observer study (he lived in communes), a cross-sectional study (120 of them), a longitudinal study (over a ten-year period), a questionnaire study (asking the same questions in each), and a statistical comparative - study (he.collected factual data on come darns and compared them with other groups of people).