Home » Aging and inequality based on age » Late Adulthood

Late adulthood is generally considered to begin at age 6-which formerly was referred to as the “normal” retirement age. However.  it changes in Social Security-regulations  that provide for full retirement benefits to be paid only after a person reaches 66 or 67  ears of age (based upon the individuals year of birth). many older persons have chosen to retire alter the traditional

age of 65. Retirement is the institutionalized separation of an individual from an occupational position, with continuation of come through a retirement pension based on prior years of service A Benchley and Baruch 2004). Retirement means the end of a  status that has long been a source Nicole and a means of personal identity. Perhaps the loss of a valued status explains why   any retired pc sons Introduce themselves by saying “I’m retired now, but I was a (banker. lawyer. plumber, supervisor. and so on)   or forty years.” As shown by ~ Map 12.1. the percentage of the population age 65 and above varies from state tWIth Florida. Pennsylvania, and West Virginia having the  highest proportion of people age 65 and over. 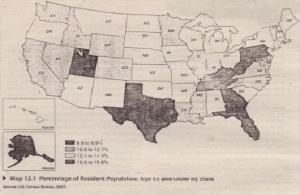 Some gerontologists subdivide late adulthood into three categories: (1) the “young-old” (ages 65 to 74), (2) the “old-old” (ages 75 85), and (3) the “oldest old” (over age 85) (see Moody, 2002). Although these are somewhat arbitrary divisions, the “young-old”  less likely to suffer from disabling illnesses, whereas some of the “old-old” arc more likely to-suffer such illnesses (Belly, 1999). ever, one study found that the prevalence of disability among those 85 and over decreased during the 1980s due to better health e. In fact, it was reported that Jeanne Calmest of Paris, France, who died in 1997 at age 122,rode a bicycle until she was 100 jitney,   ).  111 rate of biological and psychological changes in older persons may be as important as their chronological age in er mining w they are perceived by themselves and others. As adults grow older, they actually become shorter, partly because bones that e become more porous with age develop curvature. A loss of three inches in height is not uncommon. As  bones become more sour, they also become more brittle; simply falling may result in broken bones that take longer to heal. With age, arthritis reaches,   connective tissue stiffens joints. Wrinkled skin, “age . spots,” gray (or white) hair, and midriff bulge appear; however, people sometimes use Oil of Ola, Clairol, or

Buster’s Magic Tummy Tightener in the hope of avoiding looking older (Latchkey and Baruch, 2004). Older persons also have creased chances of heart  attacks, strokes, and cancer. and some diseases affect virtually only persons in late adulthood. Alzheimer’s disease (a progressive and irreversible deterioration  of brain tissue) is an example; about 55 percent of all organic natl orders in the older population are  caused by Alzheimer’s (Latchkey and Baruch, 2004). Persons with this disease have an paired utility  to function in everyday social roles; eventually, they cease to be able to recognize people they have always known and lose sense of their own identity. Finally, they may revert to a speechless, infantile state such that others must feed them. dress them, t m on the toilet, and lead them around. The disease can last up to 20 years; currently, there is no cure. Alzheimer’s affects an  estimated 3 percent of people over 65, and nearly half of those over age 85 may have the disease (Alzheimer’s Disease Education d Referral Center, 2005). Fortunately. most older people do not suffer from Alzheimer’s and are not incapacitated by their AL condition. Only about 5 percent of older people live in nursing homes, about 10 percent have trouble walking. and about 30 rent have hearing problems. Although most older people experience some decline

in strength. flexibility. stamina, and other physical capabilities. much of that decline does not result simply from the aging process d is avoidable; with proper  exercise, some of it is even reversible. With the physical changes come changes in the roles that older ult are expected (or even allowed) to perform. For example, people may lose some of  the abilities necessary for driving a car felt, such as vision vision or reflexes. Although it is not true of all older  persons, the average individual over age 65 does not react as idly as the average person who is younger than 65 (Francoise, 1999). In 2007 the issue of elderly  drivers was widely debated in e media and political arenas after several incidents in which drivers over 80 years of age caused accidents in which other people were killed or injured (see Box) 2.2). The physical and psychological changes that come  with increasing age can cause reds.  cording to Erik Erickson (1963), older people must resolve a tension of integrity versus despair.” They must accept that the life  cycle is inevitable. that their lives are nearing an end. and that achieving inner harmony requires accepting both one’s pas I accomplishments and past disappointments. As Hardy Howard. Sr.• an 86-year-old African American man. explains.

feel good to be as old as I am, and when I think back I never had any problem walking or going up stairs. no false teeth or hearing dd. no nothing like that. … You  know. what you get out of life is what you put in. Measure unto others as I would have them sure o me. Anybody I can help. ) don’t care if they’re white, black, green. or gray-anything you want, if I can do  you a favor. I’ll do it. d is has been my Logic since I was a little boy. and r haven’t changed from it even  today. (qt. in Musicology, 1992: 91-92)

like many older people. Howard has worked to maintain his dignity and autonomy. In fact. a lot of older people are able to maintain are activities for many years beyond when younger people think it might be possible.

A survey conducted for the PARA (formerly known as the American Association of Retired Persons) found that more than half of s. people age 45 or over over believed that they had satisfactory sex lives but that sexual activity and contentment diminished with age  (Toner, ) 999). The most frequent reasons for lack of sexual fulfillment were declining health and lack of a sexual partner. The partner gap was widest women age den age 75 or older. Among women and men age 75 and  up who did have partners. more than a hurt ported  that they had sexual intercourse once a week (Toner. 1999). Other recent surveys of people age 100 and over found that t centenarians have shaving I Hiving “enjoyed the journey to 100” (L. Ramirez. 1999: A).

For example. Ben Blevins. age ) 00. who regularly worked out at a gym and set a world record for the shot put in the Nike World stets Games. appeared  on The Tonight Show and other television programs talking about his longevity. Masters games and stets  athletes are terms referring to the growing number of adults who are past the average peak performance age of 35 in sporting nets   who continue to train with high intensity and compete at various levels (Morgan and Garfunkel. 1998). Will the life stages as we gently understand them accurately reflect aging in the future? Research continues to show that there are limited commonalities ween those who are age 65 and those who are centenarians; however. many people tend to place everyone  from 65 upward in categories such as “old,” “elderly;’ or  “senior citizen:’ In the future. we will probably see such categorizations revised or deleted as owing numbers  of older people reject such labels as forms of “ageism.” Some analysts believe that the existing life-course and life- hes models will be modified to reflect a sense of “old age” beginning at age 75 or 80 and that new stages will be added for those who ate neg 90 and 100 (Morgan and Garfunkel, 1998).

Posted on September 5, 2014 in Aging and inequality based on age

More from:  Aging and inequality based on age