Many animals can exchange feelings through growls, purrs, mating calls, and other sounds. Some animals we off odors or make bodily movements which convey meanings to one another. These sounds and motions are not 1 mucilage, for each is largely or entirely an inborn, instinctive response rather than an acquired, symbolic response. We.do not know whether a dog growls or barks because it wants to tell another dog something; perhaps it harks because it feels like barking. As far as we know, no dog has yet developed a barking code (e.g., one short bark for "let's eat," two yips for "after you," etc.). A language is just such a cod~ set of sounds with a particular meaning attached to each sound. A largely emotional or instinctive set of yips and yells is n t a language, event though these sounds do serve to carry some accurate meanings to others of the species. A mother soon. learns from her baby's cry whether it is hungry, sick, or .angry; but the baby is expressing its emotions, not using language Only when an artificial meaning is attached to each sound, so that the sound becomes a symbol only then do we have language. The idea of "chair" might be represented by any one of thousands of vocal sounds; when the members of -a society agree in dependably recognizing one particular vocal sound as meaning "chair," then a word has been added to the language. We limit the term language to symbolic communication and exclude the exchange of meanings through instinctive cries and sounds as not being true language. . Some highly popular books and magazine articles have coined the term ''body language" for the exchange of meanings through gestures
and body postures [Fast, 1970; Scheflen, 1973]. Some meanings probably are ex changed in this way. The question has received some scientific study [Ekman and Friesen, 1974; Henley, 1977; Druckman 1982],belt the current popularization are largely based upon intuition and guesswork not upon scientific research. Furthermore, although ''body language" may be a form of communication, it is not true language, since language is limited to communication through symbols.

human beings use symbols; therefore, only. human communication reaches beyond the level of exchanging very simple feelings
and intentions. With symbolic communication people can exchange detailed directions, share discoveries, organize elaborate activities ties. Without it, they would quickly revert to the caves and thickets. 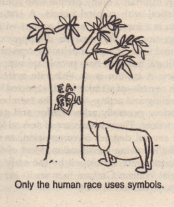 ANIMAL "CULTURE." Animals can learn; they can form interacting groups and have a social life; they can even communicate with one another at a very simple level. Some animals use objects as tools. For example, the Galapagos finch selects a suitable twig, pokes it into a crack in the tree bark, and gobbles 'up insects and spiders which scuttle out. It then saves the twig for the next poke [Smullen,. 1978] Chimpanzees have bean taught to recognize a few words in both sign language [Gardner and Gardner, 1969] and plastic symbols [Premack, 1971]. Two chimpanzees which became famous because of their role in these experiments, Wash  and Sarah, can even produce their own messages. As Goodall and others have shown, chimpanzees have a greater capacity to form attachments, feel emotion, and make human like responses than people had ever imagined [Scarf, 1973i Goodall, 1978), Such data lead some scientists to conclude that animals can have a culture [D. Hanson, 1973].

There is no evidence, however, that chimpanzees use anything like language in the wild [Lancaster, 1975; p. 71]. II is doubtful if
any non humans can understand syntax or form sentences much less teach these skills to' one another [Terrace, 1979 J. A dog can be trained not to eat until given the signal by its master. But we cannot imagine a hungry dog passing up a juicy morsel because dogs have reached a collective opinion that a particular food, although nutritious, is quite unsuitable (or a proper "gentle dog." The conclusion of most social scientists is that only humans have a culture.