What is the relationship between language and gender? What cultural assumptions about women and men docs language reflect? Scholars have suggested several ways in which language and gender <Ireintertwined  The English language ignores women by using the masculine form to refer to human beings in general. For example, the word man is used generically in> words such as chairman and mankind, which allegedly include both men and women.

• Use of the pronouns he and she affects our thinking about gender. Pronouns show the gender of the person we expect to be in II particular occupation, For instance, nurses, secretaries, and schoolteachers are usually referred to as she, but doctors, engineers, electricians, and presidents are referred to as he.

• Words have positive connotations when relating to male power, prestige, and leadership; when relating to women. they carry negative overtones of weakness, inferiority, and immaturity gender-based language reflects the traditional acceptance of men and women in certain positions, implying that the jobs are different when tilled by women rather tban men.

• A language-based predisposition 10 think about women in sexual terms reinforces the notion that women are sexual objects. Women are often described by terms “Such 1I~fox, broad, bitch, babe, or 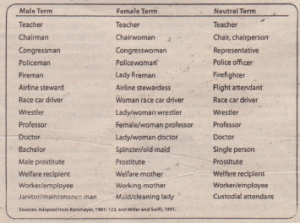 dolL, which ascribe childlike or even pc like characteristics to them. By contrast. men have performance pressures placed on them by being defined in terms of their sexual prowess. such as dude, stud, and hunk (Baker. 1993). Gender in language has been debated and studied extensively in recent years. and some changes have occurred. The preference of many women to be called Ms. (rather than Miss or Mrs. in reference to their marital status) has received a substantial degree of acceptance in public life and the media. Many organizations and publications have established guidelines for the use of nonsexist language and have changed titles such as chairman to chair or chairperson. “Men Working” signs in many areas have been replaced with “People Working.” Some occupations have been given “genderless’ titles. such as fire fighter attendant, To develop a more inclusive and equitable society, many scholars suggest that a more inclusive language is needed (see Basow, 1992). Yet many people resist change, arguing that the English language is being ruined (Epstein, 1988).