GROUP DYNAMICS
For a long time sociologists Were busy trying to convince a skeptical world that the group  real incl not simply a collection of people Only after World War  sociologists {and scholars from psychology, communications, and management) begin that serious study of small groups [Bales, 1,,; Homans, 1950; Bavelas, 1962]. Group .l#y)clinics the scientific  study of tile illiteracy unhinge small group For example, Bales developed a method for studying the interaction within a small problem solving group. The group was observed through one-way glass and each person’s statements were recorded for “interaction process analysis” under one of twelve categories such as: Shows solidarity, raises others status, gives help, ‘reward; Agrees, shows passive acceptance, understands, concurs complies; Asks footprint, evaluation, analysis, expression ~ feeling; Shows antagonism, deflates others’ status, defends or asserts self. When statements or responses were ,entered on a chart, a profile-of each person’s interaction could be plotted, patterns of leadership or resistance could be documented, and a composite profile of the entire group’s behavior could be shown. A three-stage sequence of stages could be recognized in the problem-solving process: (l)”Orientation stage: members ask and give information; (2) Evaluation stage: members assess information, share opinions; (3) Control stage: members suggest solutions, reach conclusion. This was one of the first efforts to observe systematically a group in action and to plot or diagram its behavior [Bales, 1950; Bales and Bestrode 1951]. In another set of experiments, Bavelas [1962] arranged groups of five persons in different patterns, such as the circle, the chain, the Y, and the wheel, as shown in Figure 8-1. In the circle everyone had an equal chance to communicate with everyone else; in the other patterns the person at the center had maximum communication and the others were restricted. Morale and leadership turned out to be closely related to centrality of position. Member satisfaction with the situation was greatest in the circle, where no one person emerged as a leader. In the wheel, where the one in the center became the leader, production was greater but group satisfaction less. As an offset to its lower production, the circle 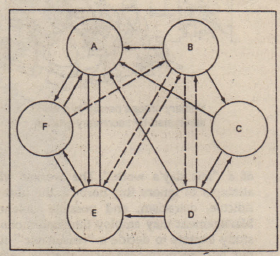 Which member Is probably the most Influential? Which seems likely to be,expelled from the group 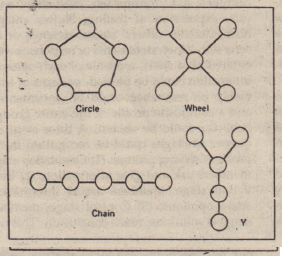 Which,person Is located SO as to be best informed and  Influential?

was found to adapt more quickly to new tasks than the other patterns. All groups have structure. This is the network of relationships and communication patterns among group members. For example some members are well-liked other are barely tolerated. The Solis developed by Moreno (1951) and others, is a picture of the structure of a group, as shown in Sociology is the specialty of social psychology that studies, measures, and diagrams social . relationships in small groups. A constant stream of textbooks and research studies in group dynamics now appears under such titles’ as Interaction in Small Groups [Crosbie, 1975], The Process of Group Communication [Appelbaum et al., 1979], Small Group Decision MIlking [Fisher, 1980), and The Small Group [Nixon, 1980). Organizations of all sorts from the military services to the YMCA, are seeking ways-to make their operations more effective. We lack space here to review the insights found through small-group research, ‘but they are many and useful: For example, we have known for years that large lecture sections in college are as effective in teaching factual material as small sections, but that small sections generate more intellectual excitement and stimulate more student thinking . ‘(Bloom, 1954, pp: 37-38). Small-group research helps us to know how ‘to make work more effective and less frustrating.