Home » PERSONALITY AND SOLICITATION » FACTORS IN THE DEVELOPMENT OF PERSONALITY

FACTORS IN THE DEVELOPMENT OF PERSONALITY Sociology Help

FACTORS IN THE DEVELOPMENT OF PERSONALITY

Biological Inheritance and Personality
A brick house cannot be built of s one or bamboo; but from a pile of bricks, a great variety of houses can be . Biological inheritance provides the raw ID aerials of  personality, and these raw materials can be shaped in many different ways. All normal, healthy human beings have certain biological similarities, such as two hands, five senses, sex glands, and a complex brain. These biological similarities help explain some of the similarities in the personality and behavior of all people.

Every person’s biological inheritance is also’ unique, meaning that no other person (except an identical twin) has exactly the same in merited physical characteristics. Not long ago most people believed each person’s personality was little more than the unfolding of that person’s biological inheritance. Such personality traits as perseverance, ambition, honesty, criminality, sex deviation; and most other traits were believed to arise from inherited predispositions. Few believe this today. Instead, it is now recognized that all personality characteristics are shaped by experience.

In  act, some claim that individual differences in ability, achievement, and behavior are almost entirely environmental, and that individual differences in biological inheritance are not very important [e.g, Whimsy, 1975]. This is the. nature-nurture controversy which has been raging for centuries. Interest in the biological basis for individual differences in intelligence and behavior is currently rising. Studies of identical twins are a favorite research approach. One study of 2,500 high school twigs concludes that “about half the variation’ among people in a broad spectrum . of psychological traits [within our society] is due to differences among people in genetic: characteristics,” while the other half is due to environment [Nichols, 1977]. The ‘most extensive twin study ever made was by the Methodological Institute of Moscow, which separated a thousand sets of identical twins .I at infancy, placing them in controlled environments for two years’ observation. The findings strongly s~ported a hereditary basis for many characteristics, including intelligence differences. This conclusion displeased Stalin, who abolished the institute and executed its director [Hardin, 1959, p. 235]. As the fate of this scholar shows, the question of heredity versus environment is not simply a scientific question but is also a political issue. Thus, Marxists and others who promote the goal of equality of rewards are annoyed by evidence that people differ in, native abilities. Conservatives joyously seize upon evidence of unequal native abilities and cite this to justify unequal rewards. But individual differences in biological inheritance are real, regardless of whether this fact makes one happy or unhappy.

For some traits, biological inheritance is more important than for others. A number of studies have shown, for example, that the
IQ of adopted children more closely resembles the IQ of their natural pants than of their adoptive parents; and within a particular
. family, the natural children follow the IQ of the parents far more closely than do the ‘adopted children [Skodak and Skeels, 1949;
Minnesinger, 1975; Horn, 1976a; Scarr and Weinberg, 1976; [uel-Nielson, 1980]. But, while individual differences in IQ seem to be more highly determined by heredity than by environment, many other differences are almost entirely environmental. .One recent study found evidence for habitability strong for sociability, compulsiveness, and· social ease, but. found habitability to be unimportant (or lead readership, impulse control, attitudes, and interests [Horn, 1976/1]. Two recent studies concluded that childhood temperament, specifically timidity, is rooted in biological inheritance [Herbert, 1982a]. Thus we may conclude that biological inheritance is important for some personality traits and less important for others. In no case can the respective influence of heredity and environment be precisely measured, but most scientists agree that whether one’s inherited potentials are fully developed is strongly affected by one’s social experience. 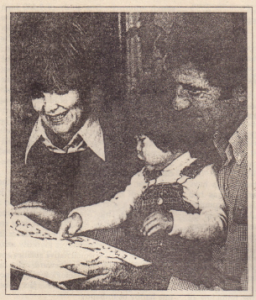 Posted on September 1, 2014 in PERSONALITY AND SOLICITATION

More from:  PERSONALITY AND SOLICITATION