Erikson and the Eight Stages of Life Sociology Help

Erikson and the Eight Stages of Life

Erik Erikson is a German-born scholar who has lived in the United States since 1933. He never completed any college degree, yet he rose to hold professorships at California and Harvard. Trained in Freudian psychoanalysis, 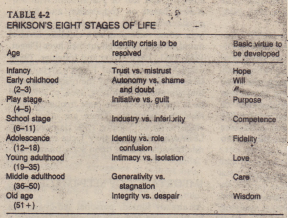 he moved beyond Freud to develop a theory of lifelike socialization through st-stages ,marked by identity' crises. These are turning paint$ in development when one must move in one of two directions. Offstages,' shown in Table 4-2, begin in infancy, when the infant team. either trust : or mistrust. If its mother .(or 'mother substitute) is tenthly -affectionate and loving and stave to the infant's. physical. needs, the infant forms feelings of security and trust. If the mother is inattentive, cold, reject, or abusive, or even inconsistent, the infant becomes insecure and distrustful.

During the second stage, "autonomy versus doubt and shame," children learn to walk, talk, use their hands, and do many' oilier
things. They begin to establish autonomy; , that is, they begin to make choices of their own, to 'express their will, to form and pursue wishes. If encouraged in this, they develop a sense of autonomy, a sense of themselves as capable persons. If thwarted in this stage, Erikson' believes they develop doubt about them selves  and feeling of shame in their relations with others.

In each of.the following step a, a similar identity crisis in which learning are necessary for a healthy In stage three, one resolves the flict and begins developing a moral setting. In stage four, the child's world broaden technical skills are learned and. feel of come petite enlarged. Th~~ first four stages correspond to Freud's four stages of childhood, psycho-sexual developmental anal genital, and latent. In stage live, the adolescent develops a Sense Of personal identity through. interaction with others. In stage six, the young adult develops lasting love nation ships with ' the opposite sex. In the middle years of stage seven, one makes one's contribution-to one's' family and to society. In the last stage, 'one comes to terms with the end of life, either in dignity or in despair. For each of the stages, there is a companion basic virtue which develops through the successful passing of that crisis. If the leanings appropriate to one stage are missed, it may be possible but difficult to acquire them later in life [Erikson, 1963, 1968 Roazen, 1976]

Posted on September 2, 2014 in FIELD AND METHODS OF SOCIOLOGY

Piaget and Developmental Learning
Freud and the Antisocial Self