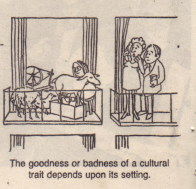 of our motives and values; we must interpret their behavior in the light of their motives habits, and values if we are to understand
them. Consider, for example, the administrator of justice in the far North. The Canadian Mounties are occasionally called to go into the Arctic region to apprehend Eskimos who have committed a murder. This action in terms of our culture is a crime, and the
individual has violated the mores.

In the culture of many Eskimo tribes, however, the killing may have been justified, since their mores demand that a man avenge an assault upon a kinsman Superuser, 1977]. This type of revenge is not considered improper but is the only kind of action an honorable man could take. We would condemn the man who takes the law into his own hands and seeks revenge, while they would condemn the man who has so little courage and group loyalty as to allow his kinsman to go un avenged Cultural relativism means that the function and meaning of a trait are relative to its cultural setting, A trait is neither good nor bad in itself. It is good or bad only with reference to the culture in which it is to function. Fur clothing is good in the Arctic but not in the tropics. Premarital pregnancy is bad in our society, where the 'mores do not approve it and where there are no entirely comfortable arrangements for the care of illegitimate children; premarital pregnancy is good in a society such as that of the Bonitos of the Philippines, who consider a woman more marriageable when her fertility has been established and who have a set of customs and values which make a secure place for the children. Adolescent girls in the United States are advised that they will improve their marital  bargaining power by avoiding pregnancy until marriage. Adolescent girls in New are given the opposite advice, and in each setting the advice is probably correct. The rugged individualism and peasant thrift of early America would produce great unemployment if they were widely practiced in our present mass-production economy.

In some hunting societies, which occasionally lungful periods of hunger, to be fat is good; it has real survival value, and fat people are. admired. In our society, to be fat is not-only unnecessary but is known to be unhealthful and fat people are not admired. The concept of cultural relativism does not mean that all customs are equally valuable nor does it imply that no customs are harmful. Some patterns of behavior may be injurious everywhere, but even such patterns serve some purpose in the culture, and the society will suffer unless a substitute is provided. Sociologists are sometimes, accused of. undermining morality with their concept of cultural
relativism and their claim that almost "everything's right somewhere, II If right and wrong are merely social conventions, say our
critics, one might as well do whatever one wishes. This is a total misunderstanding. It is approximately true that "everything's right somewhere" -but not everywhere. The central point in cultural relativism is that in a particular cultural settling certain traits are right because they work well in that setting, while other traits are wrong because they would clash painfully with parts of that culture. This is but another way of saying that a culture is integrated, and that its various elements must harmonize passably if they are to operate efficiently in serving human needs.