The cults and the sect are the  opposite poles from the ecclesia. Both are generally small and usually challenge existing social and religious values, The cult may claim links with traditional religion but its major claim is to a new religious emphasis [stark and Bain bridge, 1979]. The unification Church of the Rev. Sung Myung Moon (the "Moonies") combines some of the usual Christian beliefs with some features of Oriental religion in a novel fashion' (Kodera, 1981]. The cult may claim that it will transform the society as the                 TABLE 11-1
RELIGIONS-PASTS, PRESENT, AND FUTURE (Members in MilliOns and as a percent of word population) 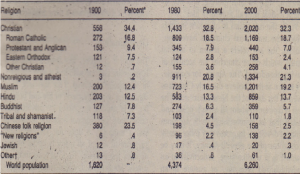 Does the equal 100%, because of, rounding off. Includes Confusian sikh, Shinto, Baha'I,  Jain, Spirittist, and Parsi. Source: World Christian Enclopydia, Oxford Universities Press, New York, 1982,p.6.
Which of these categories has change between 1900 and 1980? Which Religion has shown the greatest proportional growth?