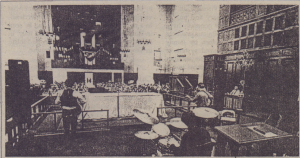 Unification Church claims, or it may look inward and stress ecstatic personal religious experience. It may also stress a particular concern, such as faith healing, and not attempt to deal with al1 aspects of life. While the cult claims to offer new insights which the traditional churches have  verlooked, the sect offers a return to original truths which other churches are accused of having abandoned. The Amish, for example, try to live as they believe the early Christians lived in the days of the New Testament. The sect is concerned about all aspects of life and insists that its members follow its doctrines without deviation. Its mores may differ greatly from hose of the general society. It may be pacifist in a warlike state, collectivist in an individualized economy, or austere in an affluent society, However, the sect makes no serious attempt to sway the general society and asks only to be ignored. It sometimes secures toleration because it is regarded as too small to be threatening. For instance a government which would not tolerate wide-spread pacifist attitudes can ignore a few Quakers or Mennonites. If a sect grows in members and makes its peace with the general society, it then becomes a denomination.

Posted on September 2, 2014 in Religious Institutions