According to feminist scholars, women experience gender inequality as a result of economic, political,  and educational discrimination. Women’s position in  U.S.work force reflects their overall subordination  in society.

Where people are located in the occupational structure of the labor market has a major effect on their earnings. The workplace is   another example of a gendered institution. In industrialized countries, most jobs are  segregated by gender and by race ethnicity. Sociologist Judith Lorber (J 99-l: 194) gives this example:

In a workplace in New York CitY-for instance, a handbag factory-a walk through the various departments might reveal theM the  owners and managers users users ers are white men; their secretaries and bookkeepers are white and Asian women; the order takers and  data  processors are African American.women: the  factory hands are [Latinos] cutting pieces and [Latinas]  sewing them together;  african American men  are packing and loading the finished product; and  non-English-speaking Eastern European women re   leaning up after everyone. The workplace as a  hole seems integrated by race, ethnic group, and  gender, but the individual jobs   re markedly segregated  according to social characteristics.

Lorber notes that in most workplaces, employees are either gender segregated or all of the same gender. Gender-segregated work   refers to the concentration of women and men in different occupations. jobs. and places of work (Reskin ar d Padavic, 2002). In  006,  for example, 97 percent of all secretaries in the United States were women; 88 percent of all engineers were  men (US.   census Bureau, 2007). To eliminate gender segregated jobs in the United States, more than half of  all men or all women workers   would have to change occupations. Moreover, women are severely underrepresented  at the top of u.s. corporations. Only about   0 percent of the executive jobs at Fortune 500 companies  are held by women, and only eight women are the  CEO of such a  company

Although the degree of gender segregation in the professional labor market (including physicians, dentists,  lawyers, accountants,  and managers) has declined since the 1970s, racial-ethnic segregation has  remained deeply embedded in the social structure. As the sociologist Elizabeth Higginbotham (1994) points  out, African American professional women find themselves limited to   employment in certain sectors of the  labor market. Most are concentrated in public sector employment (as public schoolteachers,   welfare workers, librarians, public defenders, and faculty members  at public colleges, for example) rather than in the private sector (for example. in large corporations, major law firms, private educational institutions. and private  hospitals).  cross   ll categories of occupations, white women and all people of color are not evenly represented,  as shown in • Table 11.2.  Labor  market scg multitool-the division of jobs  into categories with distinct working conditions-results in women having separate and   unequal jobs (Amott and Matthaei. 1996; Lohrer, 2005). The wage  gap between men and women is the best-documented consequence of gender-segregated work (Reskin and) 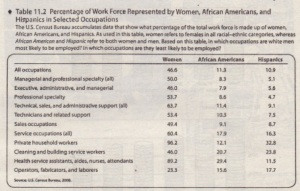 Padavic, 2(02). Most women work in lower-paying, less-prestigious jobs, with little opportunity for advancement. Because many  employers assume that men  are the breadwinners, men are expected to make more money than women in order to support their   families. For many years, wOollen have been viewed as supplemental  wage earners in a male-headed household, regardless  of the   omen’s marital status. Consequently, women have not been seen as legitimate workers but  mainly as wives and mothers (Lorber,   005).

Gender-segregated work affects both men and women. Men are often kept out of certain types of jobs. Those who enter female- dominated occupations often  have to justify themselves and prove that they are “real men.” They have to fight stereotypes (gay,   wimpy” and passive) about why they are interested in such work  (Williams, 2004). Even if these assumptions do not  push men  ut   f female-dominated occupations, they  affect how the men manage their gender identity at  work. For example, men in  occupations such as nursing  typically emphasize their masculinity, attempt to distance themselves from female colleagues, and   ry 10  move quickly into management and supervisory po ”  positions (Williams,2004).

Occupational gender segregation _ontributes to stratification in society, Job segregate.i is structural; it does not occur simply   because :’dividual v-orkers have different abilities, motiv.zones, and material needs. As a result of gender and racial segregation,  employers are able to pay many i.ien of color and all   women less money, promote them less often, and provide fewer benef ts.

More from:  Sex and Gender