Home » FIELD AND METHODS OF SOCIOLOGY » Careers in Sociology

A student who becomes interested in a subject may wonder what possibilities it holds for a career. A combination of courses which constitutes an undergraduate major or minor  sociology is not, in itself, preparation for a professional career as a sociologist. Undergraduate majors and minors are useful mainly as background preparation for other careers: 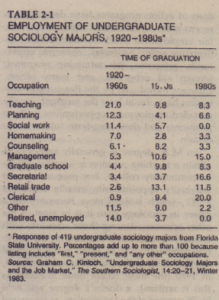 (1) In social work, the better jobs demand a graduate degree in social work, and a strong undergraduate major in sociology is usually recommended.

(2) In ult professionals medicine law, engineering-it has been found that undergraduate social science courses are useful.

(4) Civil service positions often include undergraduate sociology among the acceptable educational qualifications for a wide variety of positions in lower an'd middle brackets.

(5) Sociologists are employed in small numbers by industry, trade associations, labor unions, foundations, and . in fairly large numbers by research organizations, in a wide variety of positions, very often in the administration and conduct of research.

An M.A. degree is generally sufficient to obtain a teaching position at a junior college or community college, but promotions and
university appointments usually require a Ph.D., which is even more necessary for a career in sociology than it is in most of the
other sciences. Among those scientists with enough "professional standing in''the identified Community" to be listed in the National Register of Scientific and Technical Personnel, in 1970 (the most recent issue available as this is written), a doctor's degree was held by 76 percent of the sociologists, as compared with 66 percent of the psychology its 42 percent of the economists, 41 percent of the physicists, 36 percent of the chemists; the sociologists were exceeded only by the anthropologists, 90 percent of whom held a doctorate. Of all sociologists, about 84 percent are employed by educational institutions, with the remainder scattered among many employers, mainly government agencies and private foundations. Teaching is the major activity of 58 percent of sociologists, with 22 percent engaged primarily in research, and 16 percent in management and administration, most often management and administration of research (leaving 4 percent in "other" work).

Ftlf a quarter century after World War II, the employment outlook for sociologists was cxC'CII~t. But since 1977, college enrollments have been falUng. The Reagan administration cut funds for student loans and aids and eliminated most federal government funding for social science research. As that is written employment look to new sociology Ph.D's is not favorable. To imply otherwise would be dishonest. The market for sociologists is highly sensitive to federal government policies, and these can change rapidly. Any student interested in sociology as a career should consult sociology family members upon the current employment prospects and should obtain a copy of the booklet  in Sociology by writing to the Arcane Sociological Association 1722N Street hing ton, DC, 200(6).

For most students will not it career but merely part of their general liberal arts education. Whatever career they enter, they will be members of a society, residents in a community, participants in many groups, and carriers of the culture to the next generation. The study of sociology may aid them to fill with greater insight these varied roles which are their destiny

Posted on September 1, 2014 in FIELD AND METHODS OF SOCIOLOGY

CULTURE AND SOCIETY
The Use of Concepts in Sociology.