The Conflict Perspective
Although it stems from the work of many scholars, the conflict perspective if>most directly based upon the work of Karl Marx. (1818--1883), who saw class conflict and class exploitation as the prime moving forces in history. Largely ignored by sociologists for many.years, the conflict perspective hall recently been revived by C. Wright Mills [1956, 1959], Lewis Loser [19561, and others [Aron, 1957; Horrendous, 1959, 1964; Chablis, 1973; Collins, 1975]. Where functionalists see the normal state of society as one of stable equilibrium, conflict theorists see society as in a continuous state of conflict between groups and classes. Although Marx concentrated upon conflict between classes for ownership of productive wealth, modern conflict theorists take a less narrow view. They see the struggle for power and income as a continuous process but in which many categories of people appear as opponents=classes, races, nationalities, and even the sexes. Conflict theorists see a society as held together through the power of dominant groups or classes. They claim that the "shared values" which functionalists s e as the glue holding society together do not really form a true consensus; instead this is an artificial consensus in which the dominant groups or classes impose their values and rules upon the rest of the copper. According to conflict theorists. functionalists fail Lu ask the question, "Functionally scrofulous wholly?" Conflict the, lists accuse functionalists of a conserve bias, in that functionalists assume that u harmonious equilibrium" is beneficence to ever whereas it benefits some and penalizes others. Conflict theorists see the harmonious equilibrium society in delusion held by those who Sail to see will dominant groups have silenced those whom they exploit. 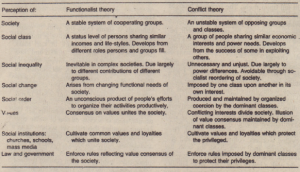 Conflict theorists ask such questions as, "How have the present patterns emerged from the contest between conflicting groups, each seeking its own advantage? "How do the dominant groups and classes achieve and maintain their position of privilege?" "How do they manipulate the institutions of society (schools, churches, mass media) to protect their privileges?" "Who benefits and who suffers from the present social arrangements?" "How can society be made more just and humane?"

Social Change
Comparison of the Perspectives